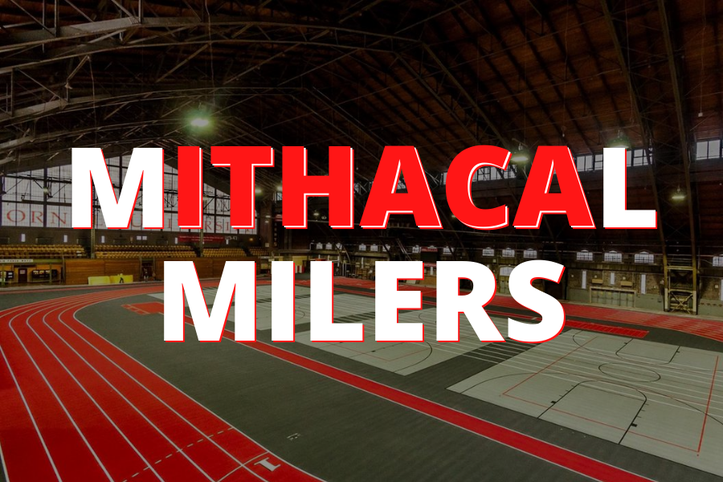 It wasn't supposed to be the last week, but Coronavirus has really impacted the area. Cornell is taking measures and stopping large gatherings, and Adam decided it would be our last indoor week. When we arrived at Barton we waited for awhile and talked about how the FLRC just had to make the decision to cancel the Skunk Cabbage Classic for this year. The Cornell indoor track team wasn't wrapped up by 7 like they normally are - in fact they were setting up hurdles at 7 pm. Soon, Adam called us over to the middle and we decided to start our warm-up on the infield followed by an outdoor warm-up.

I really want to go home

I really don't know why I had such a hard time, but the start of this evening didn't go well for me. Tonya and David had asked me if I wanted to run outside for a mile at 6:50. It was threatening rain and I didn't have proper outdoor running gear so I decided to stay and just hang out and wait til 7 pm.

When we started the warm-ups it just felt kind of off. There was a somber mood in the the group. Maybe it was having learned the Skunk Cabbage was cancelled, maybe it was because it was the last week and maybe it was just because of the general mood in the area. Learning that Cornell is sending students home after spring break and knowing your own child (at Ithaca College) will probably be in the same boat in a few days makes for a really weird headspace.

After our warm-ups Adam said we would do our warmup run outside (the Cornell team still had the track for their hurdles). I had a tank top and shorts on and it was too cold for that. I had a too heavy jacket on that I chose to wear for running. I was frustrated about going outside and just generally sad that it was already 7:20 or so meaning there was no way I'd get miles for the weekend. Now I REALLY regretted not running with Tonya and David. Here we were outside anyway and I could have gotten 2 warm-up miles in.

I ran the entire mile just listening to others talk. It seemed like too much effort to speak. That is so atypical for me. I came back in, wandered over slowly to the bathroom and contemplated just running outside for the rest of the evening. The one mile loop we did was relatively lit and it wasn't terrible to run in my too heavy jacket.

My decision was made for me when I came out of the bathroom and Adam was still setting the stage. I had reasoned that if they started while I was poking along I'd just run solo and do the steady state run. If they hadn't started it meant that I was destined to do repeats this eve. I grabbed my water bottle and walked over. Soon we were starting our 4x200 sets with 200 recovery in-between each. The group was smaller than normal. However both Tony and John were there and I really like running with both of them.

We agreed that instead of doing three 1000s we'd drop to 800s. Tonya is still struggling with her foot and John planned to peel off after 800 and then join us at the start of each. This was good given those things and the time. We are the slowest group and I knew we risked not having time to do one or both of the 400s if we kept things at 1000s. We settled into things and Tonya timed our first 800.

Tonya couldn't get her watch going on the 2nd set. Our I pace actually calls for 56 but we were shooting for 59s (T pace). That's relatively easy to time on a running clock so I took over paying attention to time for this 800. It was good for me to do this and have to think. I love the group but it is a reminder that someone has to step up to lead the timing bit and sometimes that person needs to be me. I do think that before I do this next year I'm going to sort out my timing situation. I feel like I should be able to take the lead anytime and have it not require doing math in my head as I run.

Last 400s and cool down with Ken

We finally finished with our sets of 2x400 with 400 rest in between. I loved this because John had such a strong night. The longer distances are hard for him (he rocks the 200s) and with the 800s he would be rounding the bend and staying up with Tonya and me right up to the last lap. The 400s were strong for him too. I like when other people have good evenings and feel like it brings me up. We're all in this together and we have our good nights and our bad nights. I felt grateful that I'd managed to turn my mood around.

We wrapped up and I said, "anyone want to do a slow cool down?" Tonya was done because of her foot and no one else answered quickly. Ken said, "sure" and we started running. We talked just a bit as we ran 3 or 4 laps to wind down from the workout. It was a nice way to end the workout.

Scott and I chatted briefly with John at the end. It is weird leaving a space and knowing you probably won't see someone until next December!! I really enjoyed running with this group this winter. I appreciated the opportunity to meet new people and see old friends. I'm bittersweet about it ending. It is March and I expected it to end, but found it to be a good way to spend a Tuesday eve. I know I'll transition into a new Tuesday eve plan thought.

And just as Scott and I were walking out of Barton at 8:25 we got a text from Xander. His musical rehearsal ended 40 minutes early. He is ready for a ride home. He sweetly said, "It's ok. I can just stay here until you get here." We arrived just before 9, scooping him up for a good night's rest before everything starts again tomorrow!

There are 57 other posts like this one. Here are some other recent ones: